“Whatever is sought for can be caught, you know; whatever is neglected slips away.”

Although a headline in this morning’s NY Times suggests the “Iraq War’s 10th Anniversary Is Barely Noted in Washington,” it was not overlooked by its editorial staff whose lead editorial, “Ten Years After,” notes that war “still haunts the United States” and presents the now familiar statistics — 4,500 Americans dead, 30,000 American wounded, perhaps 100,000 Iraqi casualties, and more than $2 trillion spent “which inflated the deficit”.  Although Vice President Dick Cheney’s name does not appear in the editorial, both President George W. Bush and Paul Wolfowitz, the Deputy Secretary of Defense  are charged with “using the attacks on Sept. ll, 2001 to wage pre-emptive war against Saddam Hussein and a nuclear arsenal that did not exist.”  All this is, of course, very familiar to anyone who has not forgotten that war.  But midway in the editorial, after expanding on the proposed reasons for the war at the time, the writer rings a bell I’ve been longing to hear.

“Yet, none of the Bush administration’s war architects have been called to account for their mistakes, and even now, many are invited to speak on policy issues as if they were not responsible for one of the worst strategic blunders in American foreign policy.”

Perhaps I’ve been reading too many of Sophocles’ plays, but over the past decade I’ve become increasingly inclined to view much of what can only be called the political decay of this country as evidence of a moral curse that hangs over this land that had its genesis with America’s fraudulent entry into that war.  Clarifying the actions of the prime movers of that war might go a long way toward lifting that curse.

A revisit to my journal of the early days of March, 2003 has been a revisit to my anger and anguish at the time. (I had visited my daughter and her family in Savannah during their famous St. Patrick’s Day celebration and was on my way back to CT.) Here are excerpts from a few entries:

” . . . After the boys are down, Anna and I feel duty-bound to watch Bush’s speech to the nation rehashing his now familiar mantra re Iraq (this time a forty-eight hour ultimatum to Saddam Hussain) before the invasion that will begin before the week’s end.  I can’t recall a time when I’ve felt more isolated and more sad for the state of this misguided country.  It brings to mind those letters by the relatively isolated northerners and mid-westerners as the Civil War emerged as an inevitability.  Once again, this run-away train of a nation must run uncontrolled until it crashes: the essence of tragedy.  “Tis a pity it had to be that way, but it can’t be helped we can hear ourselves saying.”

“It has already begun — at least so far as CNN now: war as entertainment!  Complete with, of course, the standard variety of commercials and soundbites. (Sharing e-mail messages: one for; one against = information!)  One hears it as one enters the terminal — the talking heads.

“I await the feigned whining that is certain to begin when the first tragic encounters are announced.  All casualties will become instant heroes and the ‘enemy’ will be further demonized.  The bully on the school yard who is outraged when his innocent frail victim actually fights back. — (I have just heard reported the instructions – via leaflets – for Iraqi troops – when read to surrender – should leave their weapons and return to their barracks since ‘the allied forces didn’t wish to be burdened or slowed down by a mass of prisoners.”  No doubt they will be outraged if they (the surrenderees) fail to follow the designated instructions.

“My God; this is arrogant madness! And it has only just begun.  There must be an obvious invasion soon, else television schedules will be thrown off.

“The concerted attempts to further demonize the French is a perfect example.  I’m astounded by how quickly the propaganda released by the White House/Pentagon sources finds its way on to the television news as undisputed truth.  The news media becomes generally the enemy of truth and fairness.  All so anger-producing and depressing and sad!”

“War enthusiasm in full swing — all being promoted as honorable and easy — there and back in a couple of weeks.  One hardly knows what to hope for!  Somehow, a quick ‘success’ would, as Twain would have put it, ‘only encourages ’em.’  They’re a dangerous bunch who have brought along a duped mass (71% now support war, according to yesterday’s news, a factor I’d like to think results from slightly manipulated questioning).” 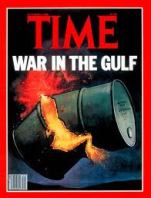 “War has grown into its grim reality — from its opening days of bombing from afar and streams of armored vehicles speeding unrestrained through the desert north of Kuwait.  We in America watch it (selectively) via television. — Last night and this morning we see the first dead and serious casualties and the first American prisoners of war — a new sight for TV audiences — The realities — the inevitable tragedies and general horrors that are war’s essence.  And this is only the beginning, both there and here at home where the anti-war protesters have already begun to be designated as the real displaced enemy.  This will become, as it did during the Vietnam War, a more seriously divisive issue among ordinary folks in the days ahead.  The inevitable damage this action will create will gradually be revealed in the weeks and months ahead — and lurking not so silently in the shadows: North Korea and most of the other Arab countries.  I suspect fifty years from now we will look back on this the way the British did before us.  No doubt, for the US government presently in power, democracy means the right for the people of occupied countries like Iraq to vote/elect only approved candidates.  See Iran of the past thirty-five years or so.”

On a side page opposite my journal entry dated Tuesday 18 March 03 I find I copied the following lines from Sophocles’ Oedipus at Colonus:

Is given immunity from eld and death;

But nothing else escapes all-ruinous time.

There is no constancy ‘twixt friend and friend,

Or city and city; be it soon or late

Sweet turns to bitter, hate once more to love.

And not a cloud, Time in his endless course

The merest nothing shall suffice to cut

With serried spears your bonds of amity.”

— Oedipus to Theseus in Oedipus at Colonus

View all posts by dpwoodiel